The chief executive of Mizuho, ​​SoftBank’s main lender, said he was “completely indifferent” to the financial health of the Japanese tech conglomerate despite the massive sell-off in tech stocks forcing him to slow down his investments.

Mizuho’s exposure to SoftBank is estimated by analysts at between $2.3 billion and $4 billion, with successive chief executives taking pride in being one of Son’s top banks. SoftBank Chief Financial Officer Yoshimitsu Goto described the partnership as a “relationship of absolute trust”.

Masahiro Kihara, chief executive of Mizuho who replaced his predecessor in February after a series of serious technology problems, said he trusted SoftBank’s debt calculations.

“SoftBank has its loan-to-value (LTV) ratio well under control and also has a cash position to cover bond repayments for at least the next two years, so at this point we don’t think there is a problem,” Kihara said.

“Of course, we analyze each other carefully. But I am totally indifferent to that,” he added, speaking at the bank’s Tokyo headquarters.

Kihara’s comments come after Son told his top executives to slow SoftBank investment as interest rates rise and Beijing enacts a regulatory crackdown on the tech sector. Son was also concerned about his personal borrowing against SoftBank stock, people familiar with the matter said.

Kihara was referring to a metric showing SoftBank’s net debt relative to the value of its holdings — a ratio closely watched by Son as an indicator of the company’s financial health.

LTV has risen from less than 10% in mid-2020 to 22%, approaching the 25% threshold that Son has sworn not to cross in “normal times”. SoftBank shares have fallen more than 50% in the past year.

The company’s shares plunged on Monday after Chinese markets sold off on fears Beijing could join Shanghai and enter a Covid-19 lockdown.

Justin Tang, head of Asian research at United First Partners in Singapore, said that in addition to the threat of disruptive “zero-Covid” policies supported in China, the war in Ukraine and rising interest rates meant that SoftBank’s Vision Fund would struggle to list its technology investments. 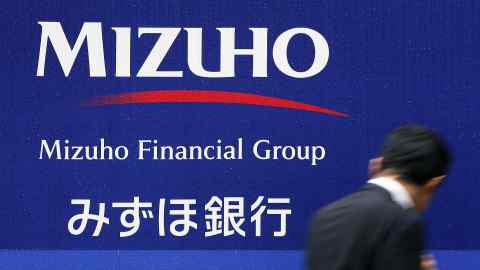 Kihara said the bank regretted past system failures, which a third-party investigation last year partly blamed on the bank’s corporate culture. The survey revealed that employees were afraid to act, preventing them from responding to crises.

Mizuho commissioned the probe in 2021, just two years after the high-profile rollout of its $3.6 billion banking system. The system has been hit by four disruptions in a matter of weeks, including one that destroyed thousands of ATMs and left customers angry after the machines swallowed their cards.

The botched rollout exposed how the bank was struggling to modernize after a decade of missteps. The bank depended on a stable of IT providers and lacked a group-wide technology strategy, according to the survey and banking experts.

“I think employees should be able to speak up about the things they’ve noticed. We should discuss and create new projects and make changes for the better,” Kihara said.

He added that he was focusing on accelerating the digitization of the bank. As part of the effort, he cited a recent tie-up with Google to use the U.S. tech giant’s cloud services to analyze data on customer transactions made on its banking apps and at retail branches.